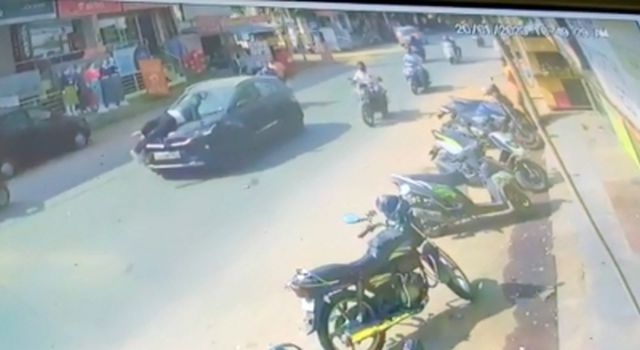 A woman in Bengaluru drove her car with a 29-year-old man stuck on its bonnet for almost a kilometre following a heated confrontation between them, the police said on Friday.

The video of the incident has gone viral on social media, taking netizens by shock.

Police said the woman, Shwetha, who was driving a Tata Nexon car had scraped through a Swift car at a traffic signal. When questioned, she showed her middle finger to Darshan, who was in the Swift car, and drove away.

Enraged by this, Darshan chased her and waylaid the car.

He had again questioned her regarding the incident after getting down from his car.

In a bid to escape, Shwetha moved the car and Darsha fell on its bonnet.

However, even as the man was stuck, Shwetha drove the car for almost a kilometre.

Darshan’s friends, who followed the car, eventually got her vehicle stopped. They broke the glass of the car’s window, and also punched her husband.

Five persons have been arrested in connection with the incident.

The police have taken Darshan, Priyanka, Sujan, Yashvant and Vinay into custody. A case and a counter-case have been registered at the police station regarding the incident.

Accused held after rape victim commits suicide in UP

KIYG 2022: Haryana surge to the top with seven golds in boxing, Maharashtra on second spot (Round Up)

‘Asur’ star Ridhi Dogra to debut in Bollywood with ‘Lakadbaggha’

After ‘FIR’ success, Vishnu Vishal gets down to work on ‘A.A.R.Y.A.N’