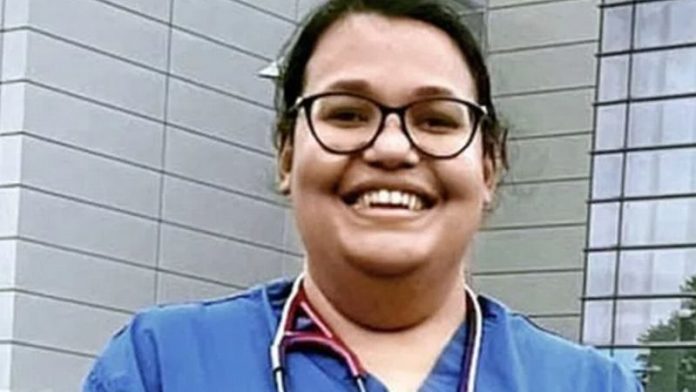 A 35 year-old British-Indian doctor, who ended her life in June last year, had blamed the hospital where she worked for her death, according to a suicide note shared by her parents.

Junior doctor Vaishnavi Kumar, who worked at Birmingham’s Queen Elizabeth Hospital (QEH), said in the letter that the working environment “just broke me”.

“I am sorry mum, I can blame the whole thing on the QEH,” she wrote in her note, which was not read out during her inquest last year, the BBC reported.

Kumar said in her note to her mother that her mental health had declined while working at the QEH and she was “now a nervous wreck”.

The inquest found that Kumar ended her life after she struggled to cope up with “bullying and condescension at work”, and often returned home crying.

Kumar’s parents told the BBC they had now released her final words in an attempt to help other junior doctors.

“She must have gone through a huge amount of bullying and stress otherwise she is not the girl who would have done this,” Dr Ravi Kumar, who believes the QEH “destroyed” his daughter, told the BBC.

“So people who have done this have done a huge amount of damage and that makes me angry,” the heartbroken father said.

Before moving to QEH, Vaishnavi Kumar worked as a chief registrar at Sandwell and West Birmingham Hospitals where she was seen as an outstanding trainee and a mentor for other junior doctors, with strong leadership skills, the report said.

Her struggle at QEH began around December 2021 and she committed suicide on June 22, 2022.

The QEH comes under the University Hospitals Birmingham NHS Foundation Trust, which is recognised as one of the leading NHS trusts in the UK with more than 20,000 members of staff.

Last month, British-Sikh MP from Birmingham Preet Kaur Gill had called on the Health Secretary to initiate an independent inquiry into the alleged bullying culture at the University Hospitals Birmingham (UHB).

According to the BBC, UHB is currently subject to three separate reviews following reports of staff saying there is a “climate of fear” at the Trust.

The Birmingham and Solihull Integrated Care Board announced a three-part review into the culture at UHB.

The first report is expected at the end of January 2023.

UAE to lift travel ban on vaccinated residents from India from...

Lobbying by US-based Islamist groups against India on grounds of religious...