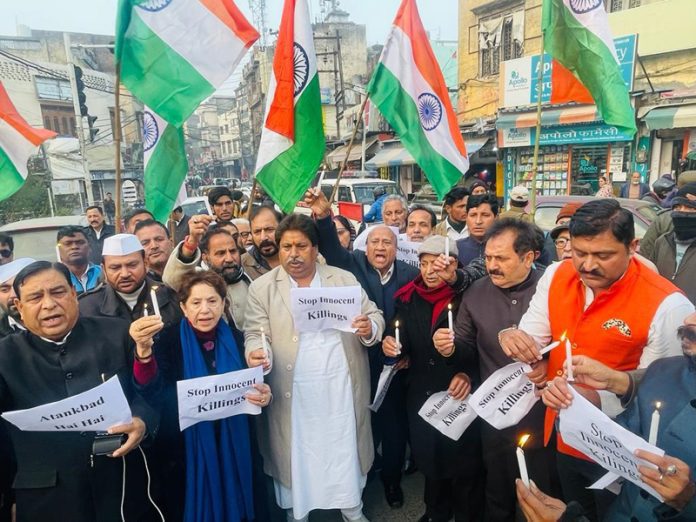 The security system in J&K cannot be judged on the basis of one or a few incidents, said Union Home Minister Amit Shah in Jammu to the media. He said the aim and resolve of security agencies is to end militancy in the UT in the next few years.

Statements like these may seem to be depicting the all-is-getting-better scenario in J&K, but the fact is that these very one or few incidents exhibit the ability of the terror network to strike at will.

The Dhangri killings in J&K’s Rajouri district prove the strike-at-will capability of the terror network. Why the terrorists choose Dhangri may be a part of the probe, which has been taken over by the NIA. The village is Hindu-dominated and the attack was aimed to create fear.

The attack had similar goriness that was witnessed in Prankote in Reasi district on the night of April 17, 1998. Twenty-nine people were massacred and 12 of them were children, some were merely 3 to 4 years old. Their stomachs and heads were severed with axes. An old man had a sharp rod pierce his ears before being hacked to death. A house was set on fire to burn all its residents alive. A girl, set ablaze, ran for a distance before she died in a nullah. The women were repeatedly raped. Seven days after the attack, the mastermind was gunned down, but his over a dozen accomplices were never caught. The survivors had no choice but to flee.

The Dhangri attack was meant to send shivers down the spine and so it did among the locals.

Jammu has witnessed over two dozen massacres since the advent of terrorism in Kashmir in 1990, where Hindus were targeted. Most of these were far away villages where access was not that easy. The motive was to create fear and make the Hindu residents flee their homes much like what happened to the Kashmiri Pandits in the valley.

The Dhangri killings were aimed to create a similar scenario. The killings are the manifestation of the dangerous trend emerging on the terrorism graph in the UT. There have been more targeted attacks on civilians. More off-duty policemen are being attacked compared to the planned attacks as was seen in the past.

Official data suggests terrorists carried out around 29 targeted attacks in Kashmir in 2022, especially on civilians that included non-local labourers and non-Muslim staff, and launched around 12 attacks, including grenade lobbing, on the security forces posted in the Kashmir Valley.

Shah in his statement to media also said, “If you want to judge it (security system), judge it since the beginning of militancy and you will find that after the abrogation of Article 370, J&K has witnessed the least incidents of violence and resultant deaths,” adding, “… Our security forces have given befitting replies to terrorists. More terrorists are dying now and fewer civilians are being killed. Even as far as minority killings are concerned, these three years have witnessed the lowest figures”.

The government wants to play down the terror threat perception that has in fact never gone away and continues to ominously loom over the UT.

The now banned The Resistance Front (TRF) has been mainly responsible for most of the terror attacks. It regularly issued threats and even released ‘hitlists’ with the names of pro-India journalists, police personnel and government employees who got jobs under the PM special package. It is the TRF which is said to be behind the Dhangri killings.

The TRF, a shadow organisation of Lashkar-e-Taiba, was created by the Pakistan establishment soon after the abrogation of Article 370 to make Kashmir terrorism appear indigenous.

The terror outfit was declared a terrorist organisation under the Unlawful Activities (Prevention) Act on January 5. And a day later it warned of terror attacks on people whose names it released on the ‘hit list’.

How well the TRF or the terror network is placed can be gauged from the fact that it is able to get the weapons, right information about its targets and easy movement and escape.

The security agencies do eliminate terrorists in gunfights, but the terror network manages to strike at its will. Its support network exists. Not all locals may be inclined or willing to help, many may be supporting out of fear, and some may be out of religious feelings.

Notwithstanding the booming business, unprecedented tourism and many Kashmiris coming up in several fields, the support to the terror work is still there. And that is also a bitter aspect of Kashmir, which often gets spilled over to regions in Jammu also.