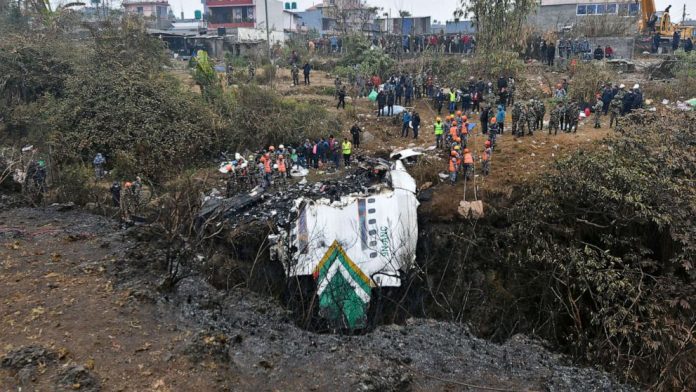 A team of experts from the France-based ATR aerospace company has launched a probe to find out the reasons behind the plane crash in Nepal’s Pokahara.

A team of experts from France has reached the crash site and started an initial probe, the District Administration Office, Kaski said.

Suresh Adhikari, Secretary of the Ministry of Culture, Tourism and Civil Aviation, said: “All stakeholders within the country and abroad have shown keen interest after the plane crash.”

There are a total of 11 foreign experts — four from the Bureau of Enquiry and Analysis for Civil Aviation Safety (BEA), an agency of the French government, responsible for investigating aviation accidents and incidents.

Similarly, six are from the aircraft manufacturer ATR, a Franco-Italian joint venture headquartered in Blagnac, France, and one expert from the European Union Aviation Safety Agency (EASA), an agency of the European Union (EU) responsible for civil aviation safety.

They travelled to Pokhara on Tuesday evening and were accompanied by another 11-member Nepali team — five of whom were from the investigation commission formed by the Nepal government.

According to him, the commission has received both the cockpit voice recorder (CVR) and the flight data recorder (FDR).

“We will examine the CVR in Kathmandu, while the FDR will be sent abroad as we don’t have the facility to examine the recording here,” according to Lamichhane. “We have not yet decided to which country we should send FDR.”

“The foreign experts will make safety recommendations based on what is learned from those investigations,” said Lamichhane.

Lamichhane is the member secretary of the government-led probe committee.

The expert team will observe the scene and discuss with the officials linked with the flights, and find out the cause of the accident.

This is the first time that an ATR plane has crashed in Nepal.

After the plane crash, the government has formed a five-member accident investigation commission under the coordination of former secretary Nagendra Ghimire.

So far, 71 bodies have been recovered from the crash site. One remains missing.

The plane plummeted into a cliff of the famous Seti River when it was about to land at Pokhara International Airport.

Two experienced pilots were flying the plane and there was hardly any weather and technical issues, according to the aviation experts.

Experts in Kathmandu have said the accident was a terrible disaster because the plane plunged in clear weather for no apparent reason.

Among the passengers were three infants, three children and 62 adults.

According to the Civil Aviation Authority of Nepal, the passengers included 53 Nepalis, five Indians, four Russians, one Irish, one Australian, one Argentinian, two Koreans and one French.

The whereabouts of one missing passenger is not known while the bodies of 22 people who died in the plane crash have been handed over to their family and relatives, according to the District Administration Office, Kaski.

The bodies of 48 people have brought to Kathmandu for post-mortem whose dead bodies are hard to identify and need the DNA test.

As the bodies of some of them could not be identified, it is said that they will be handed over to the families and relatives of the deceased after identification on the basis of DNA.

Over 200 drug suspects arrested in special operation in SL