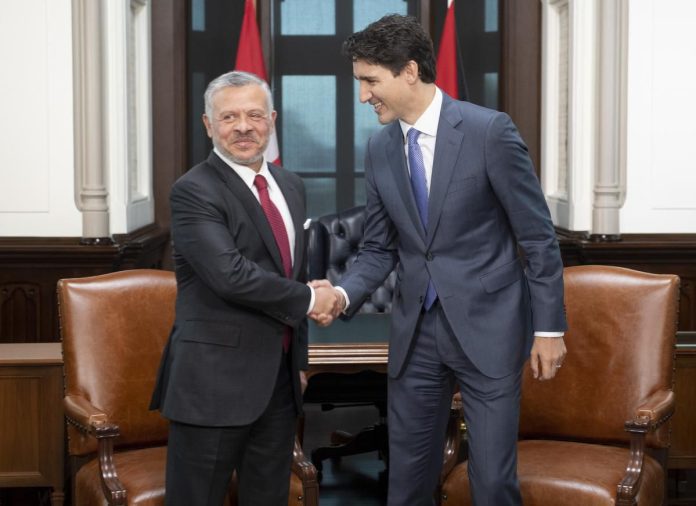 Prime Minister Justin Trudeau today announced that His Majesty King Abdullah II of Jordan will be in Canada on January 26 and 27. It is his sixth visit to the country since his ascension to the throne in 1999.

“The partnership between Canada and Jordan is deep and enduring. I look forward to once again welcoming His Majesty King Abdullah II to Canada and discussing shared priorities so we can continue making progress on important issues, for the benefit of Canadians and Jordanians alike,” Trudeau said in a media release.

During the visit, the two leaders will discuss issues of mutual interest, including promoting peace and regional security in the Middle East and countering violent extremism. They will explore opportunities to support and advocate for sustainable solutions to the conflicts in Syria and Iraq, the Israeli-Palestinian conflict, as well as the situation in Iran, the Prime Minister’s Office said. They will also discuss strengthening their commitment to protecting refugees, ensuring the delivery of humanitarian assistance, and advancing the right to education. Their conversations will also focus on cooperation around accountable governance, trade and economic growth, women’s economic empowerment, energy, and defence.

Canada has been an important trade and investment partner for Jordan since the implementation of the Canada-Jordan Free Trade Agreement. In 2021, Canadian merchandise exports totalled almost $59.6 million and Canada’s merchandise imports from Jordan totalled $121.4 million.

Through development and humanitarian assistance programs, Canada supports the Jordan’s efforts to provide a safe haven for Syrian refugees in the country and has remained a steady contributor to United Nations Relief and Works Agency for Palestine Refugees in the Near East (UNRWA), in support of its mandate to provide assistance that benefits over 2.3 million Palestinians registered in Jordan. Canada also works closely with Jordan to help resettle people fleeing ongoing crises in the region.

The King is also scheduled to meet with the Governor General Mary Simon when he is here.